How’s everyone doing today? It’s kinda cloudy and grey here. Luckily, the sun came out for just a little bit, so I could get my sunlight pictures for the nail polish I have to show you today! The weather wants my blog to be successful, thanks weather! So without further ado, let’s get to the polish!

Recently, “flaky” nail polishes have been taking beauty stores by storm. They were (and still are) an “it” polish trend. They really began when the brand Finger Paints released its “Special Effects” collection in early 2012 (a great review of these polishes was done by Jen from the Polishaholic, viewable here). These polishes looked all the same in the bottle, but when you applied them over a black polish, the iridescent, irregularly shaped glitter shards would illuminate with another color. Other brands have released similar products, such as the polish Luxe and Lush, released in the China Glaze Hunger Games collection, or the entire Revlon Moon Candy nail art collection. Essie also released flakies in their “Luxeffects” 2011 Holiday Collection (the polish was called Shine of the Times). And of course, who could forget Sally Hansen’s Hidden Treasure, which is essentially the original flaky. No matter how you slice it, flakies are an on trend nail effect that people love. The problem? They tend to be super expensive. The Moon Candy polishes retail for $8.99 a piece, Essie is usually $8-$9, the Finger Paints are $5.50 (and retired). Luckily, I’ve found an inexpensive (and still quality) substitution for the ridiculously high prices.

Introducing Funky Fingers Flaky polishes. Recently, I reviewed another Funky Fingers (the FiveBelow nail polish brand) polish called Jawbreaker. These polishes are $2 a piece, or 3 for $5. Much much MUCH cheaper than other flaky brands. This particular polish is called Taken, and has red, blue, and greenish flakies in a super sheer blue base. Really, this base barely changes the color of the base polish, so it’s still good for layering. The flakies in this polish do not need to be placed, they apply evenly, and don’t have much curling off the nail (I had that problem when I used to use China Glaze’s Luxe and Lush). The flakies in this polish are a lot bigger than the flakies in Finger Paints or Essie, but they’re pretty much on par with Luxe and Lush and the Moon Candy collection. In the pictures included, I wore the flakies over two different base colors. The sky blue is Sally Hansen Xtreme Wear Nail Color in Blue Me Away! and the black is Love and Beauty Black. Over the blue, the colors are much more muted, and the red flakies shine through, but over black, I think the color is very reminiscent of Finger Paints’ rainbow flaky, Twisted (which you can see in Jen’s post I linked above). Pictures below are two coats of Taken, one coat of Sally Hansen Diamond Strength Nail Color in Flawless as my topcoat.

This polish is a real winner for me because the quality competes with other, more high end brands like Revlon and China Glaze, and the price is virtually unbeatable. This polish also comes in a lavender base, and a pink base, among others. These polishes are available at FiveBelow stores. What is your opinion on flaky polishes? Are you onboard with this nail art trend? Let me know in the comments! 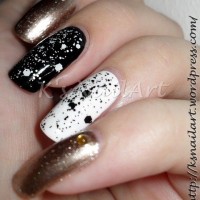 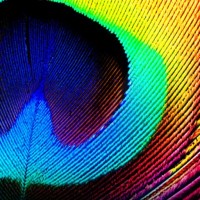 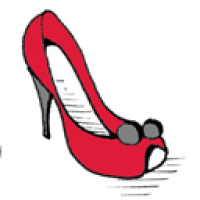 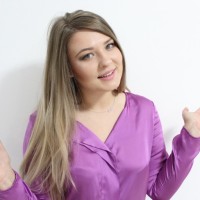 Art is everywhere, even on your fingertips!

So Many Lovely Things

A blog about beauty, style, shoes, fashion and lifestyle